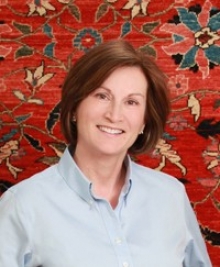 “Opportunities often present themselves when we’re not expecting them,” Connie Duckworth wrote when she began her blog, STIR, in early 2010. For Duckworth, founder and CEO of ARZU STUDIO HOPE, this was definitely the case. Prior to ARZU, Duckworth had enjoyed a long and esteemed career as a partner at Goldman Sachs, where in the 1980s and 90s she was a pioneering force for women. Shortly after she retired—which was also shortly after September 11, 2001—Duckworth was invited to join the U.S. Department of State’s U.S.-Afghan Women’s Council, designed, as she describes it, “to make sure women have a seat at the table in the new Afghanistan.”

Having no professional experience with government or international development, Duckworth only had a vague sense of what she was getting into. Certainly, she did not anticipate the dozens of desperate mothers she would find in Afghanistan, living with their children in bombed out buildings with no windows, heat, furniture, sanitation, and little food or clean water. After her first trip to the region in early 2003, Duckworth recalls vowing to “do something, even though I had no idea what the something would be.” That “something” eventually found the form of a social enterprise called ARZU, from the Dari word for hope.

A calling—many years in the making

In retrospect, building a small business in Afghanistan—a country where women and girls are virtually invisible—was a logical next step for Duckworth, who had spent her entire career helping women carve out a presence in the business sector. Duckworth, who earned her MBA in 1979 and was promoted in 1990 as the first female sales and trading partner at Goldman Sachs, was “one of the very few women who did what I did.” She enjoyed her career and worked hard to ensure other women could do the same. Indeed, Duckworth authored nearly all of the family-friendly and diversity policies at Goldman—benefits that now seem standard (maternity leave, lactation rooms, mentoring policies) but were revolutionary in the financial services industry in the early 1990s.

With this background, there is little question why folks at the State Department sought Duckworth’s help, though they could not have anticipated how much she would personally take on. While at Goldman, Duckworth had found time, together with her husband, to engage in philanthropic causes the couple felt passionately about—particularly in the field of cancer research. But her experience in Afghanistan ignited a new passion. And she now had the time and skills to put that passion to work in a whole new way.

As Duckworth charted her path down the unpaved Afghan roads, this much she knew: jobs were her top priority. With jobs, women could put food on their tables, maintain their households, and send their children to school. As she started to define the type of work she wanted to support, Duckworth focused on three key decisions.

Duckworth wasn’t wedded to any particular type of employment; she looked for work that had the greatest likelihood of success both for production and export. Duckworth has made it a priority to work with the cultural, logistical, and operational realities in Afghanistan, which pose great challenges. “I initially thought garment industry,” she admits. But in a war zone and in a culture where women would not be allowed to leave their family compounds, factories were not a possibility. At every turn, practical constraints—no commercial shipping, no reliable water or power—led Duckworth to realize that rugs were the most commercially viable option, assuming ARZU could get them up to export standards.

“We made a very early decision to go with an all-local staff,” recalls Duckworth. In a context of conflict, where very capable people often have had limited work experience, skills like creating a budget and working collaboratively are new experiences. The decision to empower locals to run the enterprise made the process of getting the business off the ground “10 times harder,” Duckworth estimates. While the training took some initial heavy lifting, the payoff has been great. When the international community gets locked down—a frequent occurrence in Afghanistan—ARZU is able to continue going about its business, moving rugs and people and money around with comparably few problems so far.

What’s more, “We don’t have expats driving around in white Suburbans,” Duckworth notes. Afghanistan, like other countries in crisis, has experienced an extensive amount of international aid—“a fire hose of funding,” according to Duckworth. While beneficial, this aid has also “triggered significant labor market distortions and corruption.” ARZU’s model of developing local human capital by investing in Afghan leadership is, to Duckworth, a way of kick-starting long-term reconstruction and economic development one job at a time. ARZU’s legacy is both “having 55 highly-skilled Afghans who run our operations from top to bottom,” as well as showing others how it can be done.

At the outset, Duckworth tried to create an enterprise that would sustain itself and not rely on philanthropy. But she now concedes fundraising is a necessity. “That’s because, at least in Afghanistan, things just don’t happen fast.” Simple logistics—shipping, internet access, the banking system, even language—present daily challenges that slow down production. It took ARZU three years to build a supply chain that could produce the quality of rugs required to compete internationally. Even with these challenges, creating a viable product was the easy part; building a brand in a recession has proven much harder. Despite strong relative growth (through the worst of it, ARZU sales grew at 10 percent in an industry down 50 percent), ARZU has a steep hill to climb and needs to double sales to be profitable. A $1 million grant from the Skoll Foundation in 2008 has gone to marketing, sales, and communication. “That’s going to be the driver of our project.”

In the meantime, Duckworth has spent her own money, as well as small grants from USAID, to get by. And her hope that ARZU would break even in seven years—an average startup timeframe—has yet to come to fruition. “We’re now self-funding about 45 percent—that’s up from zero,” she says, remaining committed to pushing that number to 100.